By Mariam Z. December 15, 2015
The fragrant myrrh of the Christmas story is the topic of today's Christmas post. Research published in 2009 has shown that myrrh may have cholesterol-lowering properties. The journal published in the International Journal of Food Safety, Nutrition and Public Health discusses the hypocholesterolemic effects of myrrh and other plant products. 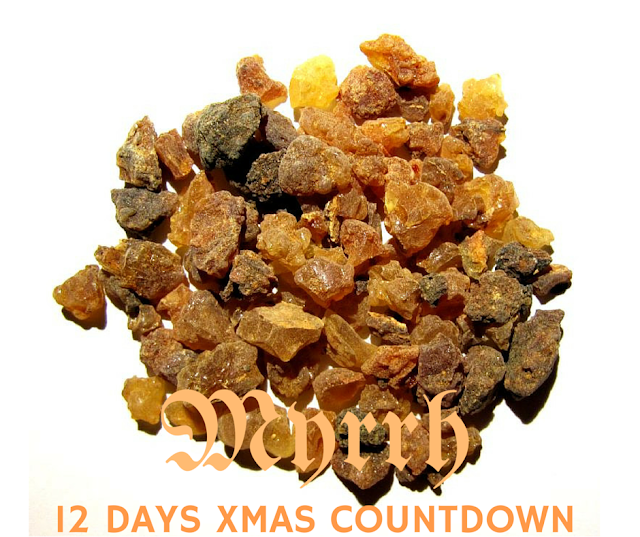 Myrrh already has been known to have many health benefits including antibacterial and anti-inflammatory effects.  And this new research has shown that there are potential cholesterol-lowering effects.
Previously myrrh has been used in a wide range of traditional remedies over the centuries as a mouthwash, for treating sore throats, bronchial congestion, as well as an antiseptic astringent, for soothing cuts and burns, and it was historically known to calm emotions.
Working with lab rodents, Nadia Al-Amoudi tested various blends of plant materials, including Myrrh, on laboratory rodents with high cholesterol. She fed the animals various combinations of the plants as part of their normal daily diet and measured blood concentrations of total cholesterol, LDL (low-density lipoprotein) and VLDL (very-low-density lipoprotein), together with TG (triglycerides). She also recorded HDL (high-density lipoprotein). The results showed that the concentrations of LDL (a.k.a "bad cholesterol"), VLDL, and TG all decreased on this diet, while the HDL levels, (a.k.a "good cholesterol") fell.
Commenting on why she chose to study the effects of herbal remedies on cholesterol levels, Al-Amoudi said: "of all nutrients, fat is implicated most often as a contributing factor to disease," explains Al-Amoudi. "Excess fat in the diet contributes to obesity, diabetes, cancer, hypertension, and atherosclerosis. So the change that most people should make in their diets is to limit their intake of total fat and so cholesterol, especially as hypercholesterolemia leads to deposits on the inside of arteries," she says. "However, certain herbal remedies are thought to help reduce cholesterol levels."
References
Amoudi et al. Hypocholesterolemic effect of some plants and their blend as studied on albino rats. International Journal of Food Safety Nutrition and Public Health, 2009; 2 (2): 176 DOI:10.1504/IJFSNPH.2009.029283
http://www.sciencedaily.com/releases/2009/12/091215160653.htm