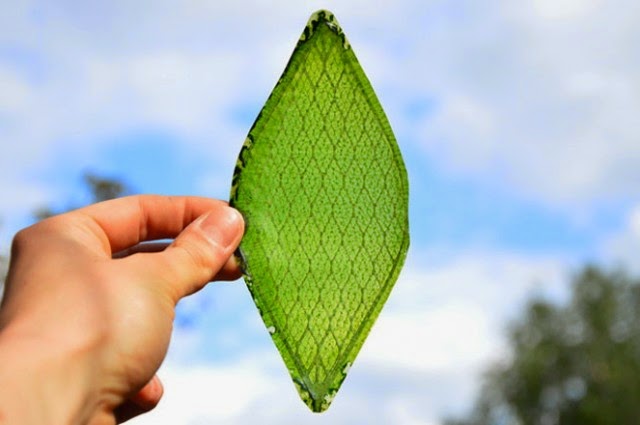 Coming from a silk lab in Tufts University, Julian Melchiorri is a scientist and artist who has introduced an artificial leaf that can undergo photosynthesis. This design was produced with the plan that it could light up the house and produce oxygen simultaneously.

He has made this invention by suspending chloroplasts (the organelles required for photosynthesis) in a body produced from silk protein. The leaf then is able to absorb carbon dioxide from the air and produce oxygen as the product, as long as there is enough water and light to feed it.

Julian believes that his artificial leaf is not only light weight, but also extremely energy and light efficient.

This seems like a great idea but there is something missing from Julian’s design: Sugar. Plants produce oxygen and glucose as the product of photosynthesis. The glucose is used to feed the plant so it can complete its complex processes.  There is no explanation on the treatment of hydrogen and carbon dioxide.

Julian hopes this will be a great aid to NASA and space exploration. He also said “It could [also] be used for outdoor applications. So facades, ventilation systems. You can absorb air from outside, pass it through these biological filters and then bring oxygenated air inside.”

Another attempt at artificial leaves but different..

In 2011, Dan Nocera from Harvard University, USA released an artificial leaf which consisted of a silicon wafer coated on each side with a different catalyst (metal oxides) - one for water oxidation and one for reducing protons into hydrogen gas. Sunlight provided the energy to drive the reaction, which makes a simple but inefficient system for generating oxygen.

Nocera is still currently working on advancing his research in his company Sun Catalytix, which is backed by the multinational company Tata Group.  The company is looking to transfer the technology to nanoparticles which can be suspended in water.