Sugar is more addictive than cocaine... – what?! 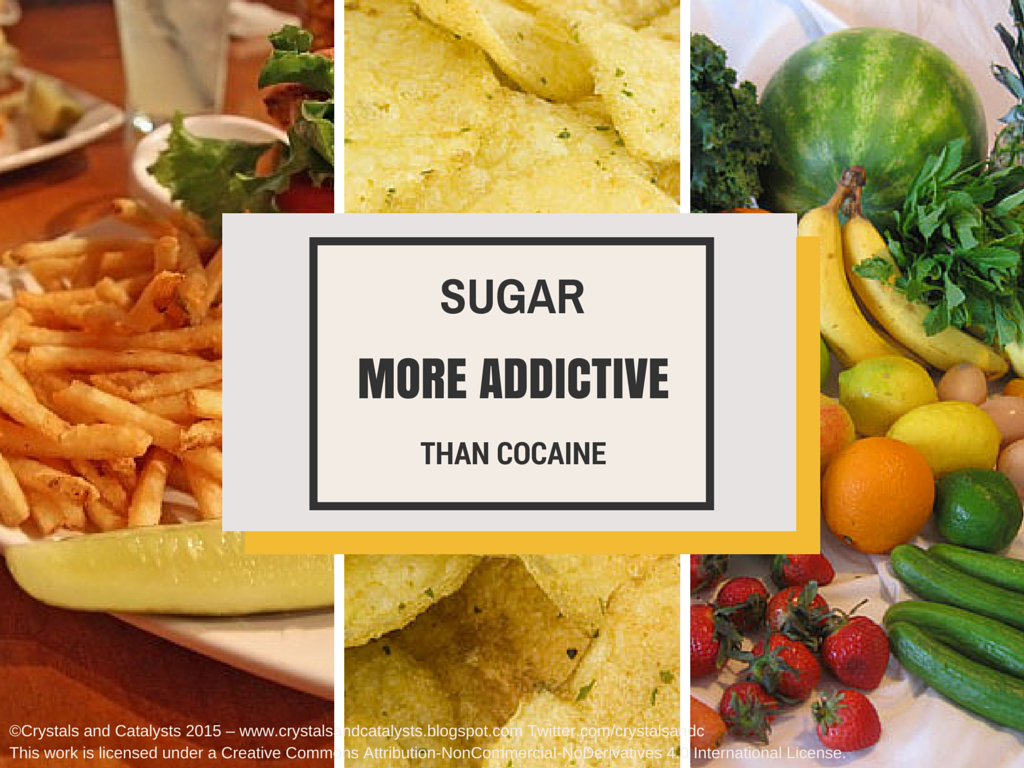 Last week the statement “sugar is more addictive than cocaine” was spreading in the science news. I personally found this really strange and hard to believe, so I was directed to an article about a study conducted by the University of Edinburgh.
The original article discusses this from a psychological and behavioural point of view to the matter. They discuss that the psychological relationship between the human and food. Some people enjoy food too much and some barely enjoy it. By using this information, the scientist try to determine whether there is a similarity between food-based addiction and substance-based addiction.  They also discuss that the reason for food-addiction (which could lead to obesity, which in turn can lead to health problems such as heart problems, increased risk of diabetes ect…) could be as a result of a mental disorder.  However there is still more research needed to prove if there is any food ingredient that possesses addictive properties.

However I want to focus on the chemistry point of view and how the body reacts with sugar and drugs such as cocaine. Sugar interacts with the taste buds in the tongue to produce a sense of taste.  The definition of a drug is something that can interact with a receptor to induce a biological response. Therefore sugar can also be defined as a drug. This idea can seem a little farfetched however it is a response all the same.

Even food can be a drug.

The consumption of junk foods and fizzy drinks has been blamed for causing hyperactivity in children. It is believed that junk foods have high concentrations of certain amino acids which can be converted in the body into neurotransmitters. If an excess of these chemical messengers accumulate in large concentrations, then too many messages are transmitted in the brain, leading to the disruptive behaviour especially observed in susceptible young children.

Cocaine can be administered by inhalation and it is a drug that can easily cross the blood brain barrier.  Addicts take cocaine to try and give a feeling of euphoria. However at large doses the drug causes the constriction of blood vessels in the brain and even brain damage.

Clearly there is a big difference between sugar and cocaine, but sweet and fatty foods, such as deep fried chips, burgers and fizzy drinks (with copious amounts of sugar in them) , have been found to give off the same reactions as to drugs (i.e cocaine). A symposium conducted in 2005, by Corwin and Grigson; established that there are neurological similarities between the responses given off to food and to drugs in humans.

Wrapping up this post, everything in moderation is better. Neither too little of food is good for you, neither is too much, but with some people food addiction is a problem comparable to drug addiction.