Deleting Paracetamol from the Pharmaceutical Dictionary

Proposals have surfaced that paracetamol should be reassessed to make a “safer” version of paracetamol without the liver-harming side effects, even though paracetamol is the most widely exploited pain-killer for everyone around the world and a good antipyretic (fever reducer).


The well-known analgesic can be used safely however it can also be abused, either accidentally or intentionally, via overdose with amounts of over 10-15g [1]. So safer versions of paracetamol need to be found to try and prevent the incidence of “paracetamol poisoning” and the many deaths caused each year from it.

Paracetamol is synthesized from the starting product, phenol, in a three step process:
1) Nitration: the nitration of phenol to achieve two isomers; 2-nitrophenol and 4-nitrophenol. 4-Aminophenol is required to continue the reaction, which can be easily extracted by steam distillation.
2) Reduction: the extracted product, 4-nitrophenol, is reduced to produce 4-aminophenol.
3) Formation of the amide: 4-aminophenol reacts with acetic anhydride to produce the final product: paracetamol. 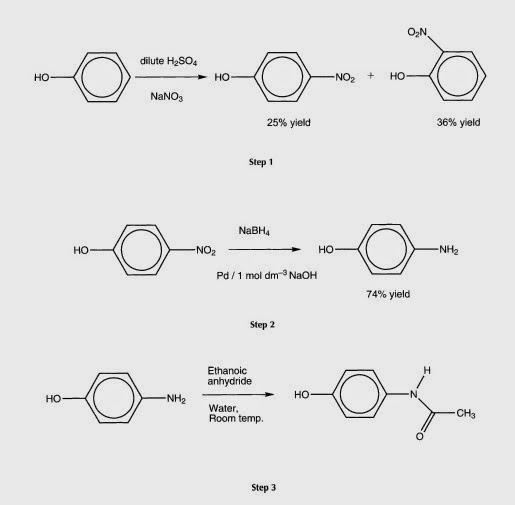 Where paracetamol is used

The oblong shaped pill is the most used and most prescribed painkiller. It is mainly used for mild to moderate pain relief and lowering body temperature. The common analgesic can be combined with codeine to make co-codamol; a stronger pain relief drug given usually to tackle acute amounts of pain such as back, muscle and bone pain and also during cancer treatment for pain relief. 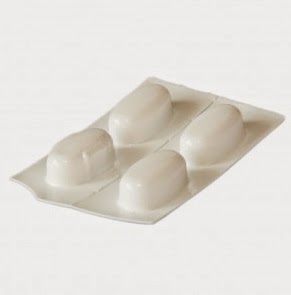 Paracetamol overdose causes paracetamol poisoning in the liver, which in turn causes liver damage. The breakdown metabolites of paracetamol cause liver toxicity. The harmful metabolites bind to liver cells causing liver necrosis.
This toxicity is due to the chemical structure of the compound and the way our bodies break it down; it is metabolised to a reactive intermediate at high doses. When paracetamol is broken down in the liver a compound called N-acetyl-p-benzoquinoneimine (NAPQI) which binds to the liver’s natural antioxidant, glutathione. In cases of overdose NAPQI depletes the entire amount of glutathione in the liver resulting in large concentrations of NAPQI being left over in the liver which go on to damage  the liver cells.

Loads of research goes into finding potential methods to producing a better version of paracetamol that has minimum amount of side effects and cannot be abused by overdose. The British Technology Group (BTG) has a patent for a safer version of paracetamol, in which they claim that the new patent makes poisoning by overdose highly unlikely. However this drug is still not approved by the NHS and is not available in pharmacies yet as it is still under testing.

Even though paracetamol is still the number one painkiller (and also the cheapest to produce), there needs to be more research and talks into discovering safer options to paracetamol and also to make them widely available to the public, to try to eliminate possibilities of paracetamol abuse.  During that time more projects can be initiated to educate everyone on the correct use of paracetamol and the safe dosages so to prevent or at least lower the cases of paracetamol poisoning in the world.