By Mariam Zaki August 25, 2019
This week, I have another guest on my blog, my friend Abdul who also studied BSc Medicinal Chemistry with me. Abdul graduated from University College London in 2018 with a PhD in Chemistry, before deciding to pursue his artistic passions and turning towards photography and broadcasting. In this blog post, he will be telling us about his experience in presenting Virtually Reality - a showcase by DoDo Lemons.

When we try to communicate complex scientific material to the world, we often get fixated on trying to insert every key term or attempt to be fun and engaging, which can make us lose our vision or the scientific message. So today, I’d like to talk about science communication through a different medium. I was lucky enough to be part of an interesting, quirky show exploring concepts of perception and its relation to mental health, such as psychosis. 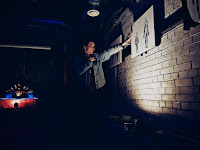 As part of the DoDo Lemons group, an artistic collective, I was asked to host the “Virtually Reality” production for a week-long showcase. This was part of the Camden Fringe Festival which happens every year in August holding 300 amazing shows in and around Camden and surrounding areas. The show’s main director and creative, Charley Ipsen, was first introduced to me through their music and electrifying band. Charley is full of energy and has a strong stage presence and I was lucky enough to get to know them further through my podcast: Tell Me Something – a series that delves into the idea of knowing people outside the world of social media. It was at this point they opened up about their life with psychosis. A truly eye-opening experience for me which really displayed the stereotypes we attach to people with any form of mental health. Thankfully, by having this conversation and participating in the show, I learnt (and hopefully taught others) a few things about human perception and how we attach ideologies to other people. 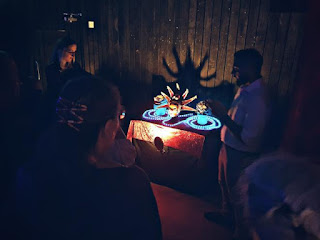 The show involved following me, the curator, around a gallery with a little twist. Without giving too much away, the immersive show allowed us to let our audience experience perception within two realities. It also provided the theoretical background to the way we get terrified by images or objects that resemble humans. A highly dense concept which could be explored in a variety of ways. The connection between our subconscious fear responses to these objects was relayed in a way that also highlights our reservation and sometimes aggressive attitudes towards people with atypical neurology or physicality. The fantastic actors and crew were able to formulate an experience for the audience that helped them understand what it is like to experience psychotic episodes. More importantly, how these occasions differed from what we perceive to be our norm. 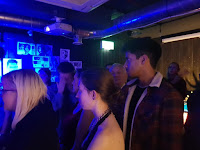 The biggest highlight of this experience was being able to have an interaction with the audience members after the show. Many were very keen on finding out more about mental health and perception, it was a fantastic opportunity to use science communication through a very creative lens. With such a great response, it was very reassuring that the concept works for both professionals in the field and people who simply want to enjoy a dramatic production. With so much covered in such a short time and limited space, the show highlighted the reality many people in the country. With 1 in 4 people suffering some form of mental illness in the UK according to mind.org, these concepts are vital to helping us understand the people around us.

DoDo lemons will hopefully return with some more thought-provoking work in the near future but in the meantime, have given us food-for-thought on how we can emphasise scientific ideas in a drastically different creative field.