One paragraph on Migraines caused by Vitamin Deficiencies 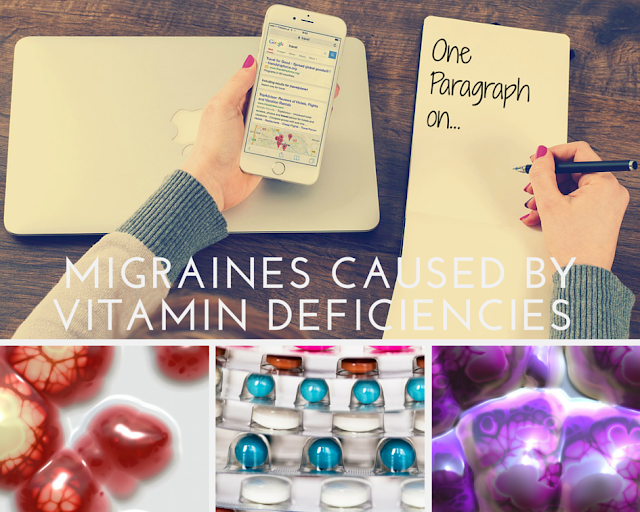 Whether it's stress or spending too much time focusing on computer/laptop screens we’re all susceptible to experiencing migraines and some people suffer from them even more than others; and we have heard many recommendations on how to prevent migraines, such as drinking plenty of water, but not the actual reasons why we get migraines. Researchers at Cincinnati Children's Hospital Medical Centre have found that a high percentage of children, teens and young adults with migraines appear to have mild deficiencies in vitamin D, riboflavin and coenzyme Q10. It’s possible that these deficiencies may play a role in the onset of migraines but this is still unclear, based on existing studies. In this study, the researchers’ trial drew from a database that looks at vitamin D, riboflavin and coenzyme Q10, all of which are all associated with migraines to some degree, and this has been reported in many previous research studies, some studies have even conflicted each other. Most of the study patients were put on preventative migraine medications and received vitamin supplements if their levels were low in the patient's bloodstream. Since a minority of the study population received vitamins alone, the researchers were unable to determine vitamin effectiveness in preventing migraines. Also, the researchers found that girls and young women were more likely than boys and young men to have coenzyme Q10 deficiencies at baseline. Boys and young men were more likely to have vitamin D deficiency but it’s unclear whether there were folate deficiencies. Patients with chronic migraines were more likely to have coenzyme Q10 and riboflavin deficiencies than those with episodic migraines. Many studies using vitamins to prevent migraines have been published but they have all had conflicting success, therefore more research, which doesn’t include the use of preventative migraine medications, is needed to determine the power that vitamins have on preventing migraines alone - and until research is no longer conflicting.