Women are less likely to get the flu than men, thanks to Estrogen

By Mariam Z. January 17, 2016
This blog post was previously titled: Females are less prone to influenza than males, thanks to Estrogen. 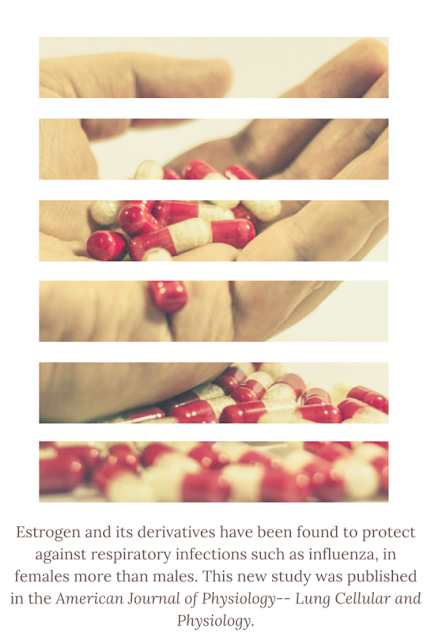 Estrogen and its derivatives have been found to protect against respiratory infections such as influenza, in females more than males. This new study was published in the American Journal of Physiology-- Lung Cellular and Physiology.

A virus usually works/makes you ill by invading a cell in your body and making and replicating itself within the host cell. After being released from the host cell, the virus can go on to infect other cells in the body and also other people.   The less a virus replicates, the less severe the infection and the lower the risk it will be spread onto other people.

The researchers used human nasal epithelial cells (hNECs) from male and female donors- which are the main cells which the flu virus targets - and exposed the nasal cells to 17β-estradiol (i.e estrogen) or select estrogen modulators (SERMs) (these include natural and synthetic compounds which act like estrogen in the body and are used for hormone therapy). The cells were then infected with a seasonal influenza virus (IAV), with each test group of cells being tested against each SERM individually.

The results showed that estrogen, raloxifene, and bisphenol A decreased the IAV titers in hNECs from female but not male donors.

Definition: Titers
The concentration of a solution a determined by titration.

Which means that the estrogen and SERMs were able to reduce the replication of the flu virus in the nasal cells of the female donors but not in the male donors nasal cells.

Sabra Klein, Ph.D., of Johns Hopkins University and lead investigator of the study commented, "Other studies have shown that estrogens have antiviral properties against HIV, Ebola, and hepatitis viruses. What makes our study unique is two-fold. First, we conducted our study using primary cells directly isolated from patients, allowing us to directly identify the sex-specific effect of estrogens. Second, this is the first study to identify the estrogen receptor responsible for the antiviral effects of estrogens, bringing us closer to understanding the mechanisms mediating this conserved antiviral effect of estrogens."